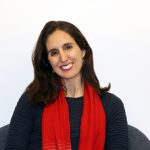 Paula Fitzgerald, Esq. is the executive director of Ayuda. As executive director, she leads Ayuda’s efforts in increasing the availability of direct legal, social, and language services for more than 8,000 low-income immigrants annually. Under Paula’s leadership, Ayuda’s programs have expanded throughout the District of Columbia, Maryland and Virginia to reach more low-income immigrants. Paula began her work with Ayuda as an immigration staff attorney, and quickly advanced as managing attorney at Ayuda’s Virginia office. Prior to joining Ayuda in 2008, Paula served as an immigration staff attorney at Hogar Hispano of the Catholic Charities of the Diocese of Arlington, and as an associate at Hunton & Williams LLP.

Paula’s personal and professional goals are driven by her inherent desire to make a lasting impact in the lives of others. Her immigration legal work focused on humanitarian relief for individuals, children, and families, including VAWA self-petitions, U visas, T visas, and Special Immigrant Juvenile Status petitions. She also has extensive experience in family-based immigration matters, consular processing, waivers and NACARA cases. Paula deeply credits her parents with instilling the values that led to her work. Her mother, a Colombian immigrant, was a social worker at a school with a large Latino immigrant population. Her father worked as a psychologist for the mentally ill at Saint Elizabeth’s Hospital.

Additionally, Paula has been recognized with many awards and accolades, including:

• The El Tiempo Latino Powermeter 100: The Nation’s Capitol 100 Most Influential People for the Hispanic Community (2019)